The Society presents an annual award to a student at St. Peter’s Collegiate School, chosen for achievements in computer science. The recipient of the 2021 award is Alex Woodham.

Some of you may remember a talk that I gave a while ago about Lord Wrottesley (1798-1867) and the observatory that he built and operated near Wolverhampton. I was approached a couple of years ago by Wolverhampton Archaeology Group to give a presentation to them. Since then lockdown has come and gone and we rearranged the talk. This was fortuitous in some ways because Steve Wootton and I had made a couple of site visits since and I could bring the talk up to date. The observatory, or what is left of it after 180 years, is on private land and I invited the landowners to the talk.

Alongside our internet lectures and Zoom meetings, the society has arranged several observations sessions and outreach events in the past few months. Here’s a quick overview of what’s been going on ‘off-line’ recently.

On 12th August we met once again at Halfpenny Green Vineyard for a meteor watch, on the evening of the peak of the Perseids. This was a most successful event, with quite a crowd turning up. We were blessed with clear skies for once, and over sixty Perseid meteors were seen over three hours. Some were bright fireballs with smoke trails, and one showed a bright green hue. This was a real fun event, as many people got excited as they spotted Perseids streaking across the sky, it was like a cosmic piece of theatre! Using the BAA meteor observing forms I tried to keep track of them all, and some of us also managed to do some deep-sky and planetary observing as well. Quite a few members tried to capture an image, and Doug’s photo shows a Perseid in Aquarius, above Jupiter (there’s an un-cropped version of Doug’s photo on the society’s Flickr page). 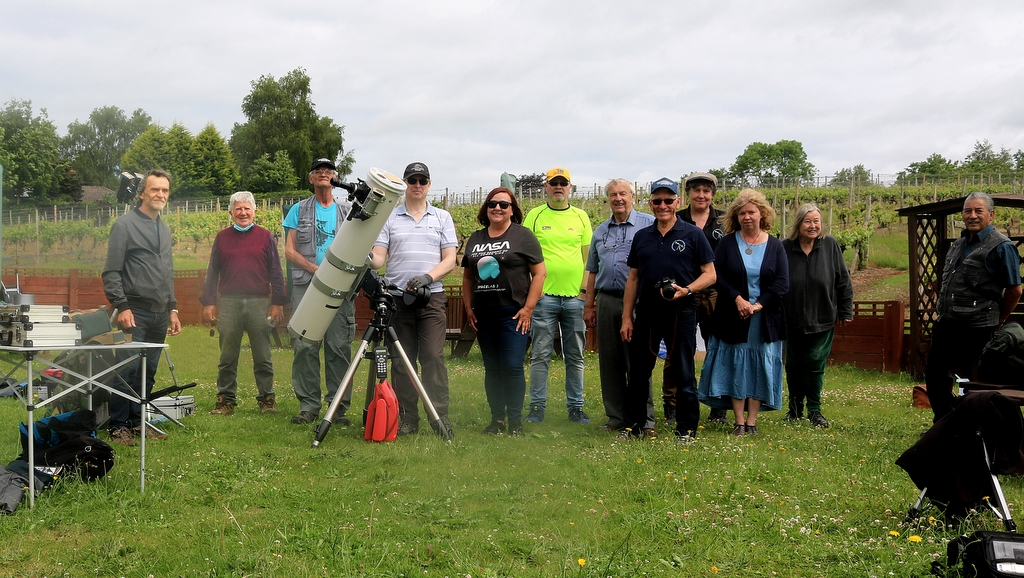 The Society presents an annual award to a student at St. Peter’s Collegiate School, chosen for achieving the requisite standard in IT/ Electronics. The recipient of the 2020 award is … Read more

By Richard Harvey On the 20th December, WolvAS practical observers once again gathered at Halfpenny Green Vineyard for an observing session. Our previous visit to the vineyard was in November … Read more

In early spring when we were effectively trapped in our own gardens, our interest in the skies I’m sure played an important role keeping us occupied. My postcode is rated by the clear outside forecast website as a bortle 6, although I think now it’s more like 7. On a good night I can see M81 and M82 galaxies but nothing like the Virgo galaxies due to the light pollution. So I thought about just playing about with the camera.
I have a canon 200d dslr, very light with a fold out and rotatable rear viewfinder. I attach it to a Skywatcher ed80 refractor with a t piece. The mount is a basic Skywatcher a/z go to. If you cannot see what you are trying to photograph the goto facility is pretty much essential.

The very sad news that Society member Dr Keith Ross had passed away at Compton Hospice on 21 April 2020 will have come as a great shock to those who knew him. Keith was a modest and unassuming member, but who was at the same time never happier than when talking about astronomy and passing on his knowledge and enthusiasm to others. It comes as no surprise to learn from his daughter Samantha that this included members of his own family, who clearly enjoyed spending time with him as he explained the wonders of the night sky when weather permitted.

He was also an active member, as evidenced by the included photograph, taken in March 2014 when he assisted the Society at an event organised during Science, Technology, Engineering and Mathematics week at Highfields School. Again showing Keith doing what he loved most, imparting his knowledge to a younger generation.

Keith passed away peacefully at Compton Hospice on 21st April 2020. A retired Consultant Paediatrician at New Cross Hospital for nearly 30 years, he was responsible for establishing the Neonatal Unit and was a greatly admired and respected doctor.

His retirement gift from his colleagues was a telescope. He had a love of science and planned to use his retirement to learn more about the sky. Owning a narrow boat, and travelling the waterways with his wife Sandra, gave him the perfect opportunity to sit on dark canal paths and look at the stars. His membership in the Wolverhampton Astronomical Society was very important to him and he always looked forward to his Monday night evenings. He enjoyed sharing this passion with his family, buying junior telescopes for the grandchildren, and regularly phoning to update them on what they could see in the sky. The whole family spent cold evenings waiting for clouds to disperse and stars to emerge, not always with success!

Lyra is the society newsletter, recording events and activities of society members.
If you wish to contribute, please email lyra (at) wolvas (dot) org (dot) uk

Unless otherwise stated, all text and images are copyright the author.